Ultra Pro Machining opened their doors in 1994 in response to an almost overwhelming demand from a number of prominent race teams. Ultra Pro's owner Don Losito, after many years of success in drag racing, started his professional race career as an engine builder in the mid 70's. By the mid 80's he was building Cosworth Indy engines with his skills being recognized by many teams. One such team was run by drag race and Winston Cup team owner Kenny Bernstein. In the late 80's Don, at Kenny's request, moved to Charlotte to port the heads and build the engines for his WC team. The demand for his heads was overwhelming to the extent that CNC production of Don's head designs was the only option.

As can be appreciated there is much more to heads than just big flow numbers. At Ultra Pro we develop heads that not only have maximized flow but also swirl/tumble is optimized. Along with this Don is able, via extensive experience and computer modeling of the ports/engine, to determine the appropriate port areas and lengths for your application. In short, we have taken the guesswork out of head and cam selection and moved it well and truly into the age of twenty first century computational science.

Successful professional race engine builders don't need us to tell them winning race engines are a near optimal parts combination. Most importantly building a maximum output engine means passing as much air as possible through the "system". Again something you already knew. The most important two system components are the cylinder head(s) and the camshaft.

What you may not know is that at Ultra Pro Machining's 31,000 sq ft facility we have 3 flow benches, 17 computers, 8 CNC machines, and a $140,000 dyno facility to put together race winning combinations. All of this is made possibly by our unbeatable experience at what we do. 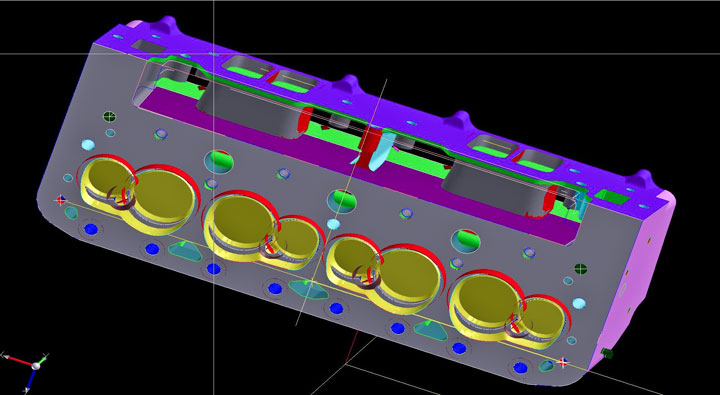